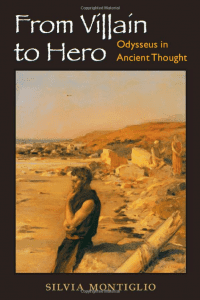 Best known for his adventures during his homeward journey as narrated in Homer’s Odyssey, Odysseus remained a major figure and a source of inspiration in later literature, from Greek tragedy to Dante’s Inferno to Joyce’s Ulysses. Less commonly known, but equally interesting, are Odysseus’ “wanderings” in ancient philosophy: Odysseus becomes a model of wisdom for Socrates and his followers, Cynics and Stoics, as well as for later Platonic thinkers. From Villain to Hero: Odysseus in Ancient Thought follows these wanderings in the world of ancient Greek and Roman philosophy, retracing the steps that led the cunning hero of Homeric epic and the villain of Attic tragedy to become a paradigm of the wise man.

From Villain to Hero explores the reception of Odysseus in philosophy, a subject that so far has been treated only in tangential or limited ways. Diverging from previous studies, Montiglio outlines the philosophers’ Odysseus across the spectrum, from the Socratics to the Middle Platonists. By the early centuries CE, Odysseus’ credentials as a wise man are firmly established, and the start of Odysseus’ rehabilitation by philosophers challenges current perceptions of him as a villain. More than merely a study in ancient philosophy, From Villain to Hero seeks to understand the articulations between philosophical readings of Odysseus and nonphilosophical ones, with an eye to the larger cultural contexts of both. While this book is the work of a classicist, it will also be of interest to students of philosophy, comparative literature, and reception studies.