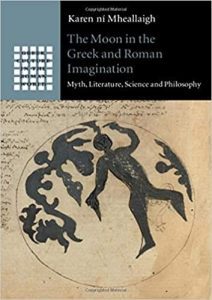 Prof. Karen ní Mheallaigh’s new book, The Moon in the Greek and Roman Imagination: Myth, Literature, Science and Philosophy (Cambridge, 2020), has been short-listed for The Anglo-Hellenic League Runciman Award 2021 among seven books that ‘show ambition, inventiveness, and real originality’. The Runciman Award has been run by the The Anglo-Hellenic League since 1986, to reward the best book published recently about Greece or on a Greek subject in English. It aims to stimulate interest in Greek history and culture from earliest times to the present; to reward and encourage good and accessible writing; and to promote a wider knowledge and understanding of Greece’s contribution to civilization and values.