Dimitrios Yatromanolakis’s publications focus on both technical and more cross-disciplinary fields: ancient Greek vase-painting and vase-inscriptions; Greek epigraphy and papyrology; the history of performance cultures (from the Homeric epics to performance genres of the Imperial period); sociocultural history of the archaic and classical periods; and historical and comparative anthropology. His publications also focus on reception theory and reception studies, intellectual history, and the European avant-garde.

Professor Yatromanolakis has been a Research Associate of Harvard University's Center for Hellenic Studies and one of the Editors of the Center's electronic database Homer and the Papyri. A large number of interviews have been broadcast (e.g., National Public Radio, USA) and articles have been published about his research and books (in, e.g., Atlantic Monthly, Harvard Gazette, and Odyssey). At Johns Hopkins, he holds secondary appointments at the Department of Anthropology and the Department of Comparative Thought & Literature.

Professor Yatromanolakis has been awarded numerous research fellowships and grants, including the William F. Milton Award, Harvard University, and the Berlin Prize. More recently, he lectured widely as an invited Senior Scholar of the University Seminars Program of the Alexander S. Onassis Foundation, USA.

Professor Yatromanolakis studied Classics and Classical Art and Archaeology at the University of Oxford. In Oxford he specialized in Greek Papyrology, studying with Professor Peter J. Parsons. He continued his cross-disciplinary research at Harvard University, where he held a three-year appointment as Junior Fellow at The Society of Fellows. He has taught as visiting professor at the Department of the Classics, Harvard University. He has co-founded and co-chairs the Research Seminar Cultural Politics: Interdisciplinary Perspectives at the Weatherhead Center for International Affairs, Harvard University. 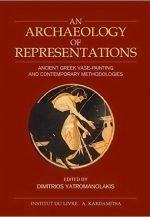 An Archaeology of Representations: Ancient Greek Vase-Painting and Contemporary Methodologies