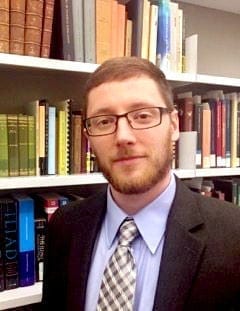 Joshua Smith is a Hellenist whose primary research focus is ancient scholarship and reading practices, intellectual traditions, and the history of literary criticism. He also has secondary interests in ancient medicine and lyric poetry.

Prof. Smith’s publications include an article on the poetic tradition of shield abandonment (rhipsaspia) in the work of Archilochus, Alcaeus, Anacreon, and Horace (American Journal of Philology 136.2). He has also co-authored with James C. McKeown a textbook on Greek and Latin medical terminology, The Hippocrates Code (Hackett, 2016). His current large-scale project is a book-length study on the history of Homeric citation in the ancient commentary tradition, a project that tackles traditional philological problems with the help of tools and perspectives from the digital humanities.  Other forthcoming work includes an article exploring the degree to which ancient readers viewed Sophocles through a Homeric lens.

Prof. Smith teaches mainly within the field of Greek language and culture, including, for example, undergraduate survey courses such as, “Ancient Greek Civilization: Society, Archaeology, Literature, Philosophy,” and language courses such as Intermediate Greek (e.g., “Lysias and Plato”) and Advanced Greek (e.g., “The Attic Orators”). He is also interested in ancient medicine and has taught courses on medical terminology and the sociology of death and dying in antiquity, the latter a collaboration with colleagues from other disciplines as part of the Medicine, Science, and the Humanities major. At the graduate level, he leads seminars related to ancient literary criticism and scholarship and also contributes to various upper-level language offerings.