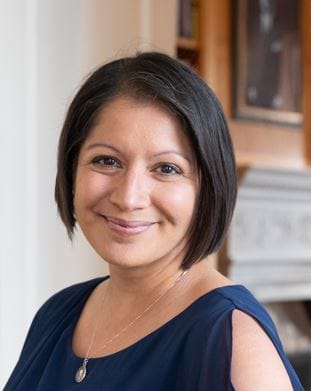 Nandini Pandey is a Romanist broadly interested in Latin literature, political and intellectual history, visual culture, and the conversations among them. She loves interrogating how meanings are made and change over time and across media; how words, images, and built environments interact with humans; and how identities and ideologies have been constructed alongside interpretations of the classics, from antiquity to the present day.

Professor Pandey's prize-winning first monograph, The Poetics of Power in Augustan Rome: Latin Poetic Responses to Early Imperial Iconography (Cambridge 2018), explores the role of Roman writers, readers, and artists in creating and contesting Augustus' public image from below. Her second book project explores social practices, legal underpinnings, and lived experiences of ethnic and cultural diversity in the Roman empire, with an eye toward modern diversity and inclusion initiatives. This research has been generously supported, among others, by the American Council of Learned Societies, the American Academy in Berlin, a Basel Fellowship in Latin Literature, the Loeb Classical Library Foundation, and the Institute for Research in the Humanities at the University of Wisconsin.

In addition to numerous scholarly articles, Professor Pandey often writes and speaks for broader audiences, notably from 2017-2020 for Eidolon. She is a proponent of public classics and an advocate for a more socially relevant, inclusive, and supportive academy. She serves numerous professional organizations, editorial boards, and support groups for historically marginalized scholars.

Professor Pandey is excited to join Johns Hopkins and to return to Baltimore after seven fruitful years at UW-Madison. She looks forward to teaching and advising from January 2021 and to participating in the Alexander Grass Humanities Institute. She hopes to find ways to give back to the local community and to make classics a positive part of conversations that matter to our city and our fellow citizens. Follow her at @global_classics.

The Poetics of Power in Augustan Rome

“Where Do We Draw the Line? Addressing Eminent Scholars’ Imperfect Pasts,” for “Pasts Imperfect,” LA Review of Books, 18 November 2021

“Turning the Tables on Dominance and Diversity in Classics,” Eidolon, 9 July 2018

“Crossing Cultures as a First-Generation Classicist: The Tears of Things on Coco’s Marigold Bridge,” Eidolon, 2 April 2018

“Engendering Aeneas’ Shield: A Femininist Rereading of Aeneid 8,” for a special edition of Vergilius (2021) on “Vergil and the Feminine,” ed. Elena Giusti, Victoria Rimell, Hunter Gardner, 67: 47-67

“Medea’s Fractured Self on the Jacobean Stage: Webster’s Duchess of Malfi as a Study in Renaissance Readership,” The International Journal of the Classical Tradition 2015, Vol. 22, Issue 3: 267-303