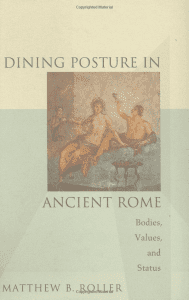 What was really going on at Roman banquets? In this lively new book, veteran Romanist Matthew Roller looks at a little-explored feature of Roman culture: dining posture. In ancient Rome, where dining was an indicator of social position as well as an extended social occasion, dining posture offered a telling window into the day-to-day lives of the city’s inhabitants.

This book investigates the meaning and importance of the three principal dining postures–reclining, sitting, and standing–in the period 200 B.C.-200 A.D. It explores the social values and distinctions associated with each of the postures and with the diners who assumed them. Roller shows that dining posture was entangled with a variety of pressing social issues, such as gender roles and relations, sexual values, rites of passage, and distinctions among the slave, freed, and freeborn conditions.

Timely in light of the recent upsurge of interest in Roman dining, this book is equally concerned with the history of the body and of bodily practices in social contexts. Roller gathers evidence for these practices and their associated values not only from elite literary texts, but also from subelite visual representations–specifically, funerary monuments from the city of Rome and wall paintings of dining scenes from Pompeii.

Engagingly written, Dining Posture in Ancient Rome will appeal not only to the classics scholar, but also to anyone interested in how life was lived in the Eternal City.