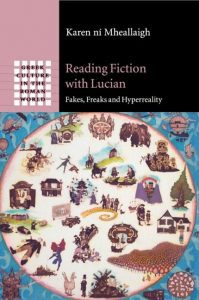 This book offers a captivating new interpretation of Lucian as a fictional theorist and writer to stand alongside the novelists of the day, bringing to bear on his works a whole new set of reading strategies. It argues that the aesthetic and cultural issues Lucian faced, in a world of mimesis and replication, were akin to those found in postmodern contexts: the ubiquity of the fake, the erasure of origins, the focus on the freakish and weird at the expense of the traditional. In addition to exploring the texture of Lucian’s own writing, Dr ní Mheallaigh uses Lucian as a focal point through which to examine other fictional texts of the period, including Antonius Diogenes’ The Incredible Things Beyond Thule, Dictys’ Journal of the Trojan War and Ptolemy Chennus’ Novel History, and reveals the importance of fiction’s engagement with its contemporary culture of writing, entertainment and wonder.